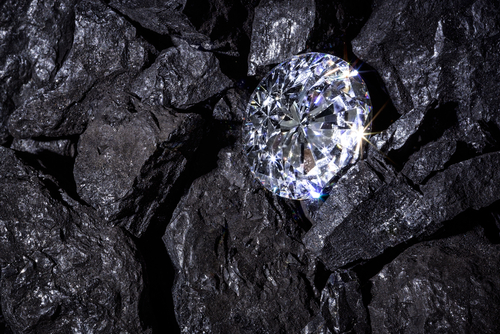 Known previously as the Premier Mine, the Cullinan Diamond Mine got its current name in late 2003. It is an underground mine situated in Gauteng Province in South Africa, and takes its name from the town of Cullinan, where it is located. Both were named after South African-born diamond magnate Thomas Cullinan. Globally, this mine has put out the biggest rough stone to date, which is the Cullinan, weighing at 3,106.75 carats. This world-famous stone was discovered in 1905, which was three years after the mine was first set up.

Kollur Diamond Mine is one of the Golconda mine family, and the most famous of the lot, sitting next to the River Krishna. Although it has ceased operations now, during the two centuries it did operate, it was run by the Golconda Sultanate, and came out with both the historic stones mentioned above, and some lesser known beauties like the Wittelsbach diamond, the Florentine diamond, the Great Table Diamond, and the Sancy diamond.

The first country to reveal volcanically sourced diamonds to the world was South Africa. It has myriad diamond mines, although none as famous as Kimberley. In fact, this even led to the naming of a specific kind of igneous rock that has likelihood of containing diamonds – kimberlite. The Kimberley Diamond Mines operated full swing during the early diamond rush, making them vital to the economic development of the country. They cover the Dutoitspan Mine, the Bultfontein Mine, the Koffiefontein Mine, and the Wesselton Mine.

The Dutoitspan Mine was set up in 1869, and continues to operate to this day. It is an eminent source of yellow-tinted stones, including such renowned ones as Golden Eye Diamond and Oppenheimer Diamond. The Bultfontein, equally old, scores less in terms of fame, while Wesselton Mine is the newest and the least known. Koffiefontein mine puts out “first water” clarity diamonds, although none of its productions is globally famed.

Aside from being instrumental in South Africa’s history and economy, the Kimberley Mines are also responsible for the Kimberley Process Certification Scheme, which works to prevent “conflict” diamonds from getting into the diamond market.

Important not just to gemologists and gem aficionados, but also historians, the Golconda diamond mines are located in what was once the Golconda Sultanate. Both the Sultanate and the mines got their name from the famous Golconda citadel. Some have estimated the region to have yielded twelve million carats of rough stone in total, to date.

Up until the mid-19th Century, these mines were actually among the few sources of diamond in the world. The Amaragiri mine was one of the notable locations, and was the source of the Nassak Diamond. Other mines under Golconda include Gollapally, Banganapally, Paritala, Mallavally, Vajrakarur, and Ramallakota. Several diamonds of unknown origin are believed to have originated from this region, such as the Wittelsbach-Graff, the Archduke Joseph, the French Blue, the Polar Star, the Princie Diamond, and the Tereschenko Blue.

Located in Lesotho, an African country landlocked entirely by South Africa, the Letseng Diamond Mine is situated in the Maluti Mountains, making it the world’s highest diamond mine by elevation. This of course means the temperatures at this mine drop very low; in fact, they frequently go under 20 degrees Celsius, saddling engineers and miners with unique challenges in plying their trade.

The mine is jointly owned by the Lesothan government and Gem Diamonds, where the latter is the majority shareholder. Its operation includes recovery of kimberlite from the Main and Satellite pipes. Although the ore quality is exceptionally low, with 2 carats or stone found per 100 metric tons of processed ore, this is offset by the quality of the unearthed diamonds, as well as the high rate of large finds. Some famous stones that originated here include the Lesotho Brown (601-carat brown diamond), and the Lesotho Promise (603 carat stone).