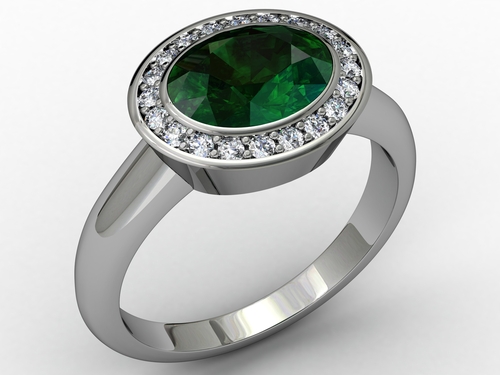 Green diamonds are among the most dazzling colored diamonds found in nature. They are formed by a process spanning millions of years and are placed in the middle of the price spectrum. Below are a few facts about the green loose diamonds.

The color of the green diamonds is formed as a result of the radiation that falls on them during their formation process and after that. The formation of such diamonds usually takes place at around 150-200 kilometers beneath the surface of the earth. This means there are temperatures reaching 1000 to 2,000 degrees centigrade across the span of millions of years. As opposed to the other colored diamonds and the colorless ones, the green diamonds are formed when the finished diamonds are making their way out after being crystallized. As they make their way out of the volcanic vents, they are subjected to radiation, which gives them the green shade.

Alpha particle radiation can find its way to the diamond and this influences the skin tone of the same. Since these radiations are not able to penetrate the body of the diamond, it acquires a light green shade.

On the contrary, when gamma and beta rays penetrate the diamond, these reach the innards of the stone and hence make them a deeply colored green diamond. These radiations are responsible for creating the Fancy Deep, Fancy Intense, and Fancy Vivid diamonds. However, these conditions occur only 0.1% of the time and hence these colors are rarely found in nature.

These stones are colored in green, only on the outer layer. They comprise a major proportion of the diamonds. These are formed from direct exposure to the alpha radiation and hence take on a comparatively light green tone.

These are the stones with a green tone in the inner body as well. These diamonds are subjected to beta and gamma radiation, which gives them this color.

The price of a green diamond is also influenced by its color. It is, in fact, the key factor in price determination.